What makes a good story?

Posted by Sanjay Dove on 29th May 2020
HomeNews & ViewsWhat makes a good story?

During my training, I did a number of stints at various newspapers, media agencies and magazines, and it was at these places where I learned what really makes a good story.

I often had to learn the hard way…

On my first day of work experience on the sports desk at the Manchester Evening News, one of my all-time sporting heroes happened to ring the paper. It was former England cricket captain, and Ashes 2005 winner, Michael Vaughan.

I took the call and couldn’t quite believe who I was talking to. I listened as Vaughan told me that he was launching a TV documentary about mental health in sport with interviews with Andrew Flintoff and other sporting stars around the pressure that international sport places on mental wellbeing.

I listened, I scribbled, I asked questions and at the end of it I thought I had a pretty good story. I wrote it up, printed it out and took it over to the sports editor with a look on my face resembling a six-year-old child about to present his art homework to his parents. Before I could hand anything over, though, this is what happened:

I learned three things from that abrupt conversation. First, journalists have a high bar for what constitutes a story, and it’s often higher than that of the untrained. Secondly, journalists are reluctant to write anything that overtly promotes someone else’s content. Thirdly, journalists really have no patience. I quietly placed my crappy artwork in the bin.

That experience has shaped the way I look to create and sell in stories for tech brands now.

But I’ve still not always got it right. When I first started in tech PR, I spoke to a journalist at The Verge about one of my clients. I’d done my research as any proper PR person should. I’d read what the journalist had written about before and I was confident picking up the phone that he’d like what I’d have to offer. I was determined not to do a “Vaughan” on him.

This is how the conversation went:

I couldn’t see the journalist because I was on the phone to him, but I could just imagine him shrugging as he said that last sentence.

It made me realise that if you’re not a household brand (or at least a big brand in your sector), you’ve really got to go above and beyond what other companies are doing to create a story that journalists will care about. To illustrate: 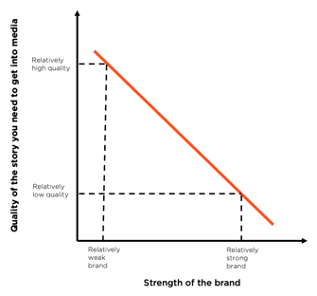 So what tends to work? What makes a good story? For me, there needs to be at least one of the following three things. If you can combine more than one together, great, but a story must must must include at least one of them… Unless you’re Mark Zuckerberg or a brand like Google, of course.

Whether it’s a celebrity scandal for the tabloids or a data breach for the tech media, the “shock” factor makes a good story. Most tech brands obviously don’t want to promote shock throughout their PR efforts, but bad news can often work in your favour.

For example, not long ago, we worked for a dark web monitoring company called RepKnight. While we were working for them, Instagram reported a major breach, admitting that a number of “high-profile users’ data had been leaked. Instagram would not say which users had been affected though. RepKnight’s analysts subsequently found a significant number of celebrities’ phone numbers and email addresses for sale on the dark web. So we told the media about it, and secured about 100 pieces of coverage in just a couple of days.

While shocks can be a surprise, not all surprises have to be shocking. If you say something that contradicts what most people think or believe, you probably have a story.

For example, one of our current clients, Emarsys, launched a tool last month assessing the impact of Covid-19 on consumer spending. You may be forgiven for thinking that since coronavirus kicked in, consumer spending had plummeted. Emarsys’s data showed that it hadn’t necessarily — it had just gone online as people spent their lockdowns unable to go to physical shops.

We spent a month pitching various “surprising” stories into the media, demonstrating what consumers are spending their money on, from cats and dogs to luxury items and tripods. We’ve managed to secure more than 80 pieces of coverage, including pieces in Forbes, Entrepreneur and CBS MoneyWatch.

Comedian Tim Minchin once wrote a song saying that, despite all his amazingly and cleverly written jokes and songs, he’ll never get as many hits on YouTube as kittens waking up. The same sentiment can be true of the media. Sometimes the best kind of stories are the funny ones and not necessarily the clever ones.

Case in point — we once got national coverage for a communications client called Fuze with a story on World Toilet Day around how much people check their work email sitting on the loo. And I know many marketers may argue that getting coverage around people sitting on the bog is a bit glib, and doesn’t really do much to help brand image. However, there is something to be said about the importance of brand salience along with brand image. Some even argue (and I would agree) that salience is more important than image. I believe that getting the brand name out there as much as possible is a good thing — even if it doesn’t immediately add anything to the image.

Storytelling is an art form, not a science

I haven’t mentioned any of the basics about storytelling, like balance or structure, because you need all of those bricks to build the outline of a story. To make it worthy for the media, however, you need one of the three things above in addition.

But like that six-year-old who gives their parents their art homework to stick on the fridge, stories are an art form and not a science. What one journalist may like, another may detest, and sometimes there’s just no rhyme or reason to who will like what. You’ve just got to get on with it, try lots of different types of stories, and do everything you can not to be Michael Vaughan (except if you’re playing a cover drive).

For more advice on getting people to engage with your brand, check out this blog on creating the right tone of voice