The Wildfire way of measurement in PR

As PR agencies go, Wildfire is unashamedly nerdy. While we are a group of creatives in a beautiful riverside boathouse in suburban London, we’re also bunch of mad scientists who like to conduct experiments on all aspects PR — and we like having a logical, methodical approach to our work.

So, forgive me in this blog post if I talk about the logical aspect of PR, rather than the creative, and use this as a chance to talk about measurement. After all, we won an award for it a month or so ago.

PR has a reputation of being beastly to measure. Back in the pre-digital era before we could track the most intricate of details of PR, that reputation was probably fair. We were lumped into the same boat as advertising, where measuring the effectiveness of a campaign was wholly unscientific. The famous US merchant John Wanamaker once famously said: “Half the money I spend on advertising is wasted; the trouble is I don’t know which half.” The same was pretty much true of PR.

But now we’re in the digital age — and the advertising industry has stormed ahead with the sheer number of metrics it uses (like click-through rates and engagement rates) to justify itself. Marketers expect PRs to be able to do the same, and then we end up trying to measure the wrong thing, which serves nobody well.

“The ROI of Marketing” – new cartoon and post on the communication gap between CMOs and CFOshttps://t.co/mHp7YrzsPx #marketing #advertising #ROI #cartoon pic.twitter.com/U58dnGwQfY

In my mind, there are three ways to approach measurement from a PR point of view — by output, by outcome, and by impact. Not all are equal in terms of their value, but they are a useful way of framing everything how measurement should work (in my opinion anyway) in a PR world:

1. Measurement by output — pretty useless for the most part

When we put together a campaign plan for an existing client or a new business prospect, we tend to include a list of “deliverables” at the end — i.e. the number of press releases we’ll write and sell in, the number of articles we’ll secure and write, the number of case studies we’ll complete for you, the number of social media posts we’ll put together, and so on… These are the individual components that make up a campaign. We include this level of detail so that, while you’re actually paying for our time, you get an idea of how we’re intending to divide up that time to fulfil the activity we’re promised.

For most businesses though, measuring by output is not particularly useful, and yet there are organisations out there that still measure the value of their PR agency by the number of press releases they write. Seriously, who cares? I would argue that, unless you specifically want to check that your agency is fulfilling the right scope of work, or that you’re not going over budget on certain activity, ignore what deliverables your agency has done for you, and focus on measurement by outcome and impact instead.

2. Measurement by outcome — the bread and butter of PR

I know many PR agencies have different definitions as to what constitutes outcome, but when I think of that term, I pretty much think of solely coverage. How much coverage did you receive for all those press releases and interviews that your agency secured? In what tier media was the coverage? What was the reach of the coverage? Did the coverage include the client’s messaging or did journalists just name check the company as part of a wider story? Was the sentiment largely positive?

If you’re measuring social media by outcome, you’d be looking at impressions, shares, retweets, comments, engagement rates and so on.

Every agency measures this stuff; it’s the bread and butter of digital PR. But again, who cares? If you’re the marketing person in charge of a PR agency, you’ll understand the value of coverage and social media engagement, but if you’re trying to justify to your boss why your agency is worth the money, coverage alone and “social shares” don’t usually cut it. I mean, it’s nice and all, but so what? Isn’t coverage just a bit of a luxury? Is it really that important? Why does it matter that our tweets and LinkedIn posts got a few hundred thousand impressions? That’s why we as an agency will devote a portion of our time to the next level of measurement as well — on impact.

3. Measurement by impact — where we should really focus

Now things start to get a bit juicier. It’s in this space that we can demonstrate that what we do helps you to hit your objectives, and helps your boss hit theirs.

For example, for many of our clients, “awareness” is often a primary objective, whether it’s building awareness of the brand itself or a generating a splash about a product that they’re trying to promote. Getting coverage is great, but that doesn’t necessarily mean your target audiences are “aware”.

Enter stage right Google Analytics. Thank you to the gods at Google who created this tool because Google Analytics is, hands down, the best tool in a PR’s armoury when justifying our existence. If you’re worried about handing over the viewing permissions of your company’s Google Analytics account to your agency, don’t be. We can’t break your website through the tool, and we’re under NDA. The benefits of using Google Analytics for PR are huge:

1) Measure traffic spikes correlating to our campaigns: While we’re running a campaign, we’ll monitor how much traffic your website gets. If there happens to be a big spike, and we know that the business isn’t running any special marketing activity (like an event) simultaneously, we can be pretty sure that that traffic has come to the site as a direct result of PR — whether it’s coverage driving traffic to the site or social media activity:

2) Measure report downloads or landing page views: Content is often at the centre of our PR activity, and through media promotion, we look to drive the right audiences to consume that content. Google Analytics measures report downloads and landing page views, and tells you exactly where the traffic is coming from — again, whether it’s from specific pieces of coverage or from social media activity: 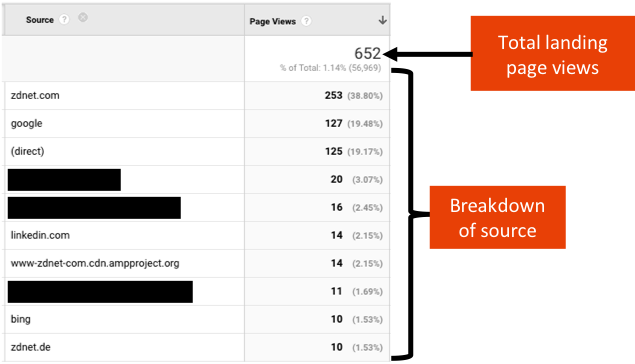 3) See exactly where traffic is coming from: The releases we send out will always include a backlink to the client’s website, which the journalist can include in their coverage. Google Analytics enables us to see how many people have come through to the site by clicking on the links in coverage. And the more backlinks you get, the better your SEO becomes, which again, is something we measure intrinsically as part of our PR campaigns. You can also compare how much traffic coverage is driving versus social media:

There’s so much more that we can measure with Google Analytics than I could possibly describe in just one blog post. But aside from what we can measure to prove the value of PR, the insights from Google Analytics help us to better inform our PR strategy for the next campaign we run. For example, if we’re noticing that one particular piece of coverage is driving most of the traffic, we can focus our efforts on developing stories specifically for that one particular publication — and make sure we get coverage there more frequently.

BUT… Not everything valuable can be measured

While we’re in the spirit of science, Einstein once said: “Not everything that counts can be counted, and not everything that can be counted counts.” It’s the perfect way to assess the measurement model above. The long-term benefits of PR in terms of reputational change and how you’re perceived by your target audiences are tough to measure, and just because we can measure the number of impressions your tweets get doesn’t mean that we should (unless of course you’re a social media manager with a specific need for that level of detail).

Whatever your needs, we’ll come up with a way that measures PR that’s useful for you and easy to understand. Whether it’s monthly reports, quarterly reviews or ad hoc performance updates, we’ll prove to you we do a good job.

THE 414 – Strategically Integrating PR With Marketing To Build And Feed Sales Funnels [EPISODE 10] from WOW Video Production on Vimeo.